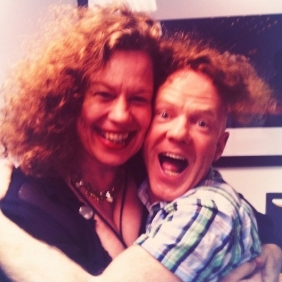 In 1985 I met Jimmy Sommerville at a Miners Benefit in Brixton where I was performing with The Happy End. My brother had been at drama college with Richard Coles and decided to bring Jimmy to meet me. We thought it would be great to perform together and Jimmy and Richard had been asked to perform a few weeks hence at a Gays The Word Bookshop event at the Fridge, our local nightclub. We decided in the end to duet Billie Holidays 'Lover Man' as if we were singing about the same man. London Records were in the audience and observed the audience going crazy at the combination of Jimmy and my campness and the look and sound of us. Both of us are redheads and Jimmy petite and I towering over him at 5ft 8 on platforms. Jimmy was already a big star having had many hits with Bronski Beat and his falsetto next to my very low contralto was a wonderful combination. I was asked to go to New York with Jimmy and Richard that December. We had an absolute ball making the album and we rented an apartment in Manhattan and partied endlessly when we weren't recording.

It was Jimmys' idea to record 'Don't Leave Me This Way' as it was one of his favorite disco classics. Mike Thorne produced the album which went on to be a Gold album and the single 'Don't leave Me This Way' went to Number 1 all over the world ,with the exception of USA, where it went to Number 50. I toured with The Communards for a year all over the world and it was a great experience.

25 years later Jimmy and I reformed to perform as part of the Rewind festival and so far have done four of five performances in the UK from Ascot to Brighton Arena. Jimmy is singing better than ever and its very fortunate that we have both been able to continue with our careers as a lot of our contemporaries are no longer singing or performing.

Maybe one day Jimmy and I will record another duet. Watch this space!