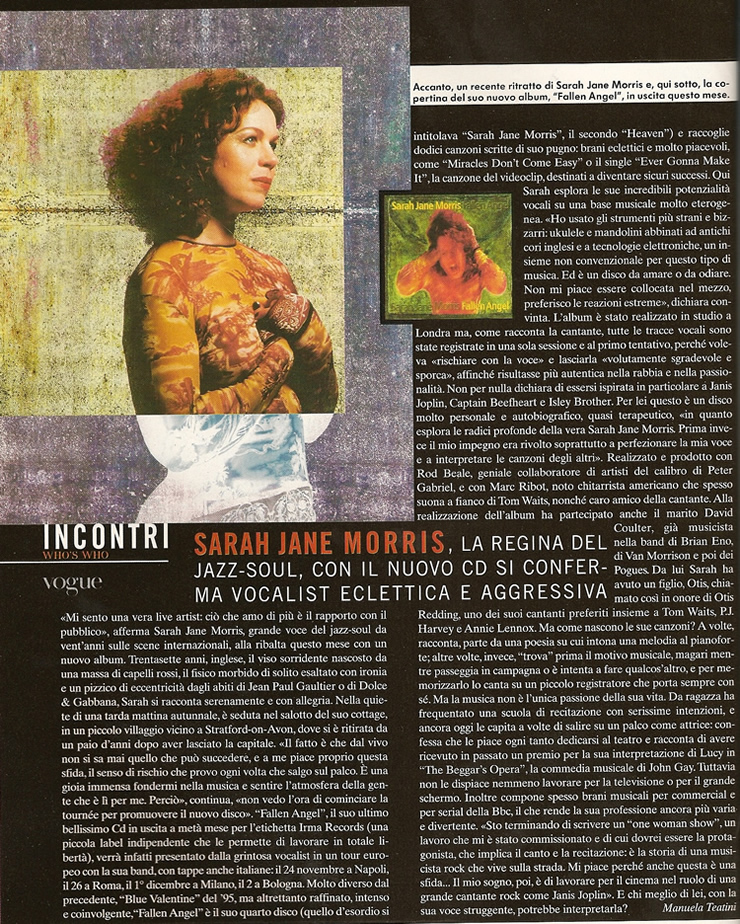 Sarah Jane Morris, Queen of Jazz-Soul, confirms her reputation as an eclectic, aggressive vocalist with a new CD.

'I suppose I'm really a live artist because what I really love is being able to relate to an audience,' says Sarah Jane Morris, the 36-year-old British singer who those in-the-know rate as one of the world's great jazz-soul vocalists of the past twenty years and more. Other attributes include a smiling face masked by a mass of red hair, and softly rounded contours accentuated by Jean Paul Gaultier and Dolce & Gabbana garments worn with obvious irony and a touch of eccentricity. Sarah talked cheerfully and openly about herself, comfortably ensconced in the sitting-room of her cottage in a small village near Stratford-upon-Avon where she now lives after moving out of London two years ago. 'The thing is that you never what's going to happen when you sing live. I love the challenge, the feeling of risk I get whenever I walk on stage. It's great to get right inside the music and sense the reaction of all those people who are there to hear you sing. I can't wait to get started on the promotional tour for my new CD.'

Sarah and her band will be touring Europe in late November-early December to promote Fallen Angel, due for release in the middle of this month [November] by Irma Records, a small independent label that allows her to work in total freedom, with a schedule that includes Italian stopovers in Naples (24 November), Rome (26 November), Milan (1 December) and Bologna (2 December). Though equally sophisticated, intense and involving, her fourth disk Fallen Angel is very different from its predecessor Blue Valentine (1995), third in line after Heaven and her debut recording Sarah Jane Morris. It brings together twelve of her own songs in a delightfully eclectic mix that includes surefire hits like Miracles Don't Come Easy and the video single Ever Gonna Make It. Sarah explores her incredible vocal potential using a correspondingly wide range of instrumental backing. 'I used really strange, bizarre combinations like ukuleles and mandolins with cors anglais and electronic backing, which are pretty unusual for this kind of music. It's a disk you'll either love or hate, and that's good. I don't like middle-of-the-road responses, I much prefer violent reactions.'

The album was studio-recorded in London but, as Sarah points out, all the vocals were done in single takes in just one session because she wanted to take risks with her voice and leave it sounding 'deliberately coarse and unpleasant' to convey a more authentic sense of passion and anger. Not surprisingly, she lists Janis Joplin, Captain Beefheart and the Isley Brothers among the vocalists who have inspired her most. She sees Fallen Angel as a highly personal, autobiographical, even therapeutic statement which 'digs down to the roots of the real Sarah Jane Morris. In the past I used to spend a lot of time trying to perfect my voice so I could sing other people's songs properly.' She developed and produced the disk with Rod Beale, who has already done impressive work with vocalists of the calibre of Peter Gabriel, and her close friend Marc Ribot, the well-known American guitarist who often plays alongside Tom Waits. She was also assisted by her husband David Coulter, who has played with Brian Eno, Van Morrison and the Pogues. Their son Otis is named after Otis Reading, one of her favourite vocalists along with Tom Waits, PJ Harvey and Annie Lennox.

How do her songs originate? Sometimes, she says, by fitting a piano melody to a poem as she reads it aloud. But it can happen the other way round when a tune comes to her while she's out walking or busy doing something unconnected with music. She always carries a small cassette recorder around with her to fix tunes before they fade from memory. However, music isn't her only passion. As a teenager she went to drama school with pretty serious intentions, and even now occasionally appears on stage as an actress rather than a singer. She admits to feeling drawn to the theatre and once won an award for her role as Lucy in John Gay's musical comedy The Beggars Opera. But she also likes working in television and movies, and often writes music for commercials and BBC TV serials, which makes her career even more varied and enjoyable. 'I'm coming to the end of writing a one-woman show that was commissioned with myself as protagonist, which means I have to act as well as sing. It tells the story of a rock musician who lives on the streets. I like it because it's a challenge• My dream is to work in movies as a great rock singer like Janis Joplin. With the voice she has, who better than her to play the part?
©2022 Sarah Jane Morris