Ian Shaw talks to the multi-talented Sarah Jane Morris about rhythm, writing and reinvention Sarah Jane Morris has topped the international charts, played Brecht, won the San Remo Song Festival, sold out five seasons at Ronnie Scott's, sung contemporary opera, been followed by fanatical Italian schoolgirls (she's huge in Italy), been murdered twice on television, and had songs written for her by Paul Weller - creative achievements that go on and on.

She lives with her composer partner, David Coulter and their little boy Otis, in an old Warwickshire post house in the leafy lanes and fields of middle England. It would perhaps be more fitting for her to live in a Soho loft, a Berlin attic or a Paris studio, places that echo the sounds of urban decay and city madness reflected in her stories, her songs.

I caught up with her on the eve of the release of I am a woman, the best of SJM. I reminded her of the early days: the size nine builder's boots, the Victorian lace knickers, the megaphone brandishing redhead fronting The Republic, then the hugely popular The Happy End. Only SJ could belt out those revolutionary songs – songs of the workers, rants of the deprived, the imprisoned, the despairing.

'That was a great training. The Happy End was just before I joined the Communards. It gave me a huge confidence to be big, to seat and not have to pretend to be someone. The lyrics I was singing then helped me to be brave, to later be inspired to write similar words of my own. My voice has developed so much since then. I've added one and a half octaves and developed the courage to experiment with overtones and harmonics… I've just completed an album with the great Marc Ribot and for the first time ever, I've found an instrumentalist who uses the same effects with his pedalboard as I do with my vocal cords. His musical character feels like my own. He comes from an avant-garde back, ground: Together, they'll be appearing at a few festivals at the end of the year, including the London Jazz Festival, as well as venues in New York and Umbria. The album will be coming out on Morris' own label, Fallen Angel.

I asked how, after 15 years of 'belonging' to record labels, she felt about going it alone. 'I've been giving too much of myself to far too many people for much too long. Since having a baby, my whole approach to life has changed. Apart from having a larger body and feeling physically and spiritually more powerful, the levelling experience of childbirth has given me the confidence to ask for my time to be paid for, I don't think twice about turning things down if the fee isn't right! I've also realised that having the wrong management can stop people reaching me. I've just sacked my fourth manager and the liberation was fantastic! How can anyone represent me if they don't really know me? I've set up my own label and my own back catalogue - I'm on the Madonna trip and I'm not going to give it back! Live performances are where I'm at my best - my album Blue Valentine, Live at Ronnie Scott's is so representative of my voice at its best, although I'm very excited about another album which will be out next year and uses more unusual percussion to create loops alongside layers of my vocals.

One of the most engaging features of Morris' vocal style is how she interacts rhythmically with her band. Listen to how figures of wordless, pulsating triplets fire like bullets between herself and her percussionist. She fuses her love of Ronald Isley, Marvin Gaye and Stevie Wonder with the bluesy sandpapered timbres of Janis Joplin and Tom Waits. She can also cover the entire baritone range down to an eerie-sounding bottom F. Her appearances at Ronnie Scott's are as subversive as they are inspired - just as the Friday night crowd is dancing to Harlod Melvin's 'Wake up Everybody', an original song, 'Blind Old Friends', depicting the jealous rage of an ex-lover who gouges out the eyes on old photos, stuns the crowd to silence. We've all felt this way. This is real. This is no pretty jazz canary. Please listen. This is 21 st century blues.

Although Sarah Vaughan and Bessie Smith are also big influences on her style (her take on Nina Simone's 'Don't Smoke in Bed' is heartstopping), Morris is forever chasing the musical Zeitgeist, citing the rumble and tumble of Morcheeba and the beautiful lyricism of Moloko as current favourites. What advice would she give young singers? 'I've recently been asked to contribute to a popular music course at a local college. I went in fully admitting that I was a trained actress, not a trained singer, and used this theatrical background. I got great results from the students and we were soon experimenting with sound and body movement and the power of creating an atmosphere, totally a cappella. Also as a songwriter myself, I found that the students' voices flourished more when they sang their own stories rather than doing Beatles covers. My newest path is definitely my own compositions and collaborations. Although interpreting jazz standards and re-inventing old rock tunes has been very exciting, singing my own songs has given me the confidence to truly sing from the soul.'

Like Björk, Morris has combined theatre and film with music. Some years ago, her nightmarish Sprechgesang won rave reviews in The Sleep, an opera by the English composer Jeremy Peyton Jones. Equally her Polly in The Beggars Opera won her a best actress award. It is engaging that these occasional music theatre outings never reduce her solo shows to lounge cabaret. Morris always lets the abstract shine through – more Julette Greco than Julie London.

A fascinating side to Morris' career is her mega-star status in Italy and Greece. Does this bother her – going from the huge concert halls of Rome and Rimini to the Vortex in North London? 'No, not at all. I love the enormity of a stadium as much as the intimacy of the Vortex or Ronnie's. I probably flourish more in the smaller venues because I like to see people's faces and I like them to see me, warts 'n' all! Also, the smaller venues let the humour and irony through. There's a danger aspect, which I love. Because my musicians are not on retainers, I'm often forced to compromise and use a smaller band while they go off with a huge 'signed' band. I've been reduced to just bass and voice on one occasion and it was a creative shove in yet another direction.'

Always pushing and extending her barriers, never trying to be contemporaneous or hip; always looking for new vocal expression, never a tourist, never pastiche, always exciting, Sarah Jane Morris is an English treasure and one of our best exports. There are plans of her signing to a US label, but as long as there are clubs and halls in this country, you can catch this powerful, disturbing, soulful, often hilariously funny performer at her favourite best - live ... and uncensored. The angel has risen! 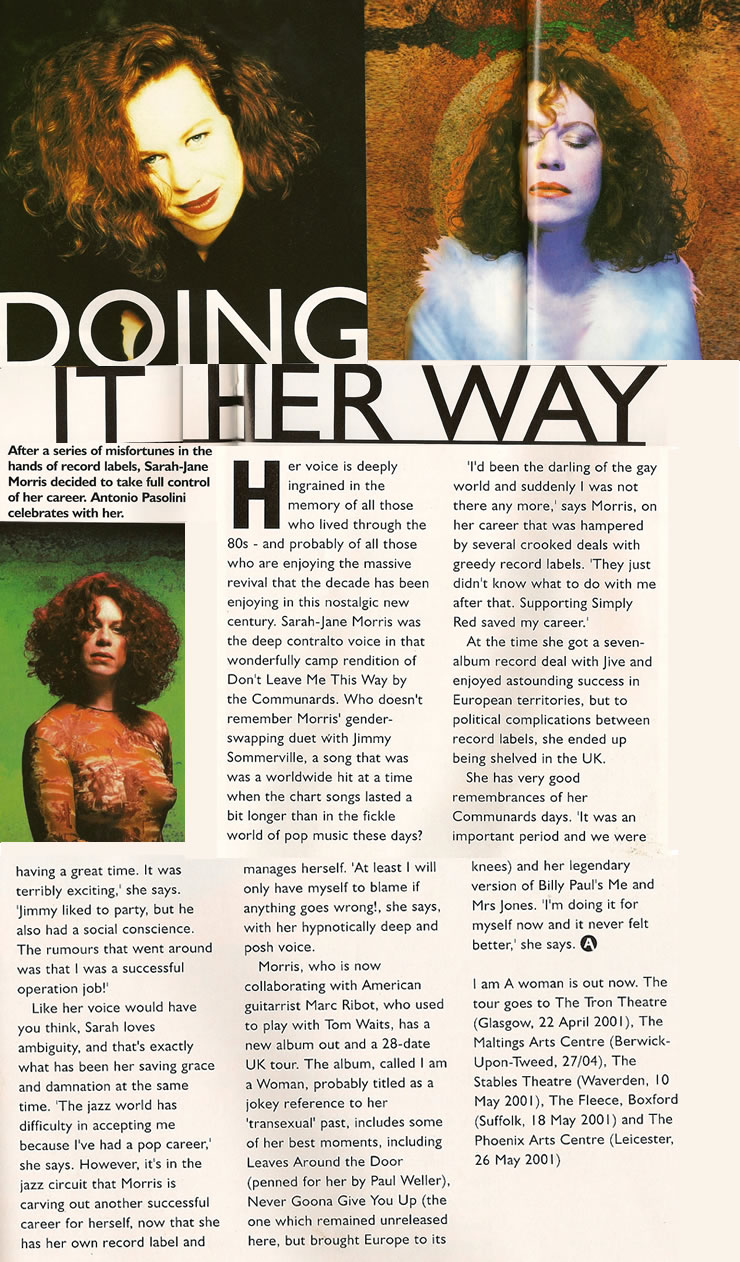